If You Really Like to BBQ, Thank Henry Ford!

After two failed attempts at establishing an auto company, Henry Ford founded the Ford Motor Company on June 16, 1903. It was only seven years before Ford Motor’s founding that Henry had completed the development of his horseless carriage that he dubbed the Quadricycle, which spurred the Detroit Automobile Company's formation in 1899. In 1901 a company reorganization yielded the Henry Ford Company. However, within a  year, disputes with investors forced Ford to leave.

How Did Henry Ford Come to Manufacture Charcol?

Ford founded a whole new company and immediately began producing the Model A at the Mack Avenue Assembly in Detroit. This model proved profitable, and for the next twenty years, a succession of models would be developed, culminating in the Model T, which would sell over 15 million vehicles.
At that time, automobiles were crafted with about 100 board feet of wood in each vehicle. Finished wood could be found in the steering wheel, dashboard, chassis, and wheels. Wood consumption was huge. Each production day, one-million board feet a day was used to manufacture the popular Model T’s, whose chassis was made mostly of wood.

Ford, ever the innovator with minimizing waste, sought solutions to avoid depending on suppliers for components that made up his marvelous machines; this included milled wood. During this period, Ford was also in the midst of a massive undertaking to bring small-scale manufacturing to rural areas. His Village Industry experiment sought to reduce the reliance on large centralized factories. Ford was also concerned about the reliance on fossil fuel. He saw it as a potential threat to national security and to the Ford enterprise. 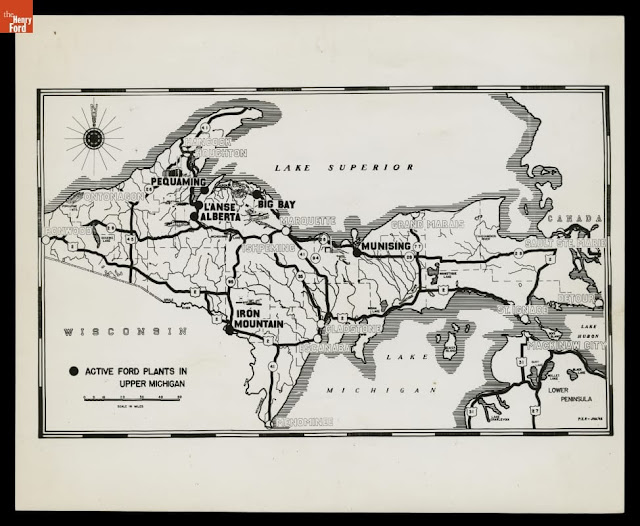 After camping and exploration trips in northern Michigan, Ford focused on making its own wood components. He reached out to his cousin’s husband, Edward Kingsford, operating a Ford dealership in the remote mining and lumbering town of Iron Mountain in Michigan’s Upper Penninsula. Ford wanted to purchase forest land for lumber products at Ford Motor, a true vertical supplier integration play.  Kingsford found and purchased 313,000 acres for the operation. Sawmills were built at Pequaming, L'Anse, and Alberta. Iron Mountain was one of the biggest operations as it included an extensive sawmill and hydroelectric plant. Kingsford became Vice President of its operation.
While not considered one of the 20 Ford Village Industry sites, Iron Mountains operations shared many aspects of the rural sites. Most notably is the use of locally created power utilized to run the plant.

Lumber and Milling Operations at Ford Motor in Iron Mountain 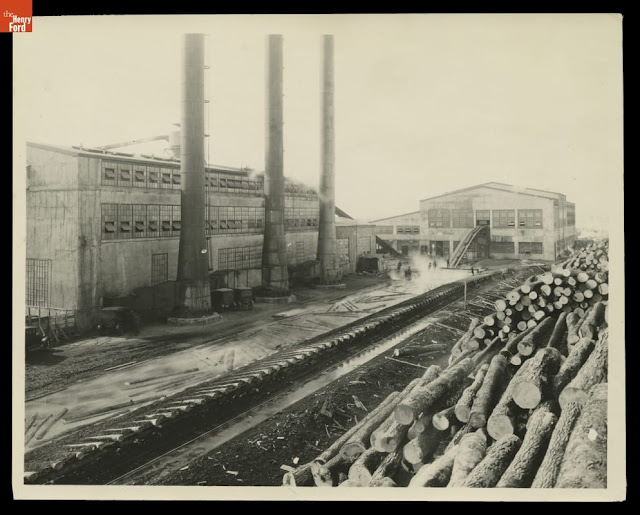 The operations in Iron Mountain, besides milling wood, also included distilled scrap wood into chemicals for downstate plant operations, paint production, and antifreeze. The tons of sawdust and scape wood from the lumber mill and production process were collected, dried, and burned in special ovens. The resulting charred wood was crushed, mixed with potato starch, and compressed into usable briquettes for heating, cooking, and smoking meats and fish. 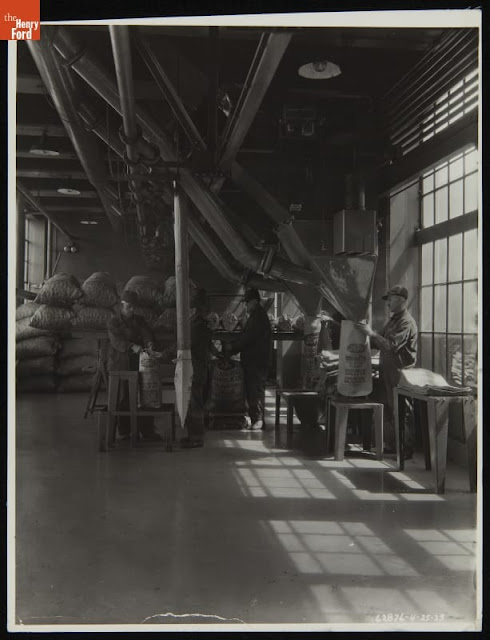 The at its height, the plant produced 100 tons of charcoal briquettes a day. However, this amount exceeded what was needed in northern Michigan. Soon the charcoal briquets were packed, branded, and shipped to its dealerships, who sold the charcoal across the country. Ford was so pleased with this innovative product that during Chicago's 1933-34 Century of Progress Exposition, Ford included the packaged charcoal in the exhibit. “Picnic Kits” with Ford charcoal and portable grills were sold to promote leisure motoring, and picnicking soon began appearing for sale in Ford dealerships, and a whole new industry was born.

The Begining of Kingsford Charcoal

Ford died in 1947, and the company was taken over by his grandson Henry Ford II. The grandson, known as the Deuce, worked to phase out the Village Industries and Ford Charcoal Briquette Company at Iron Mountain. Ford sold the wood chemical operation to local businessmen who changed the name to its founder. The Kingsford Chemical Company was founded in 1951. Kingsford Charcoal remains is the largest producer of charcoal briquets in the world.
In a way, Henry Ford was responsible for today’s popularity of the backyard grilling using charcoal that is the same type.