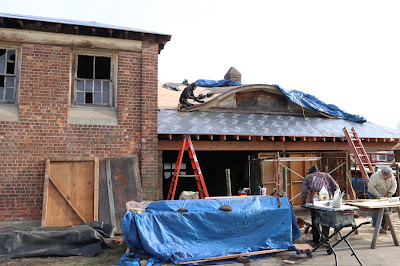 For decades, City of Detroit foresters industriously labored away in a quaint sawmill within Belle Isle Park, giving trees from streets and parks new life as usable wood after they were removed for road widening or death from disease, pests, or storms.

Shut down more than 40 years ago, the sawmill sat quiet and mostly forgotten, until 2014, when the Michigan Department of Natural Resources began managing the 982-acre island in the Detroit River as the state’s 102nd state park.

Now, the 80-year-old sawmill building is getting a new life of its own.

Since autumn 2020, workers have carefully restored its roof, replacing rotted boards with tongue-and-groove Douglas fir planks cut to match the originals as closely as possible. Rotted beams are being replaced, and shingles are next.

The work is the first phase of a coordinated effort to renew the sawmill building. The restored site will serve as a hub for interpreting a unique aspect of Detroit’s history related to urban trees and forestry.

The sawmill’s second act will be to engage visitors in learning about the practice and benefits of urban forestry today, specifically the importance of trees and forests in our communities. Trees provide products and services and improve our quality of life.

Since last operating in the mid-1980s, the mill has sat largely forgotten, its huge, circular saw blade rusted in place as weather and abandonment took their toll on the rest of the building.

“During the DNR’s transition to managing Belle Isle, there was a process for identifying the nature and infrastructure resources present. At that time, we realized this old sawmill existed,” said Kevin Sayers, urban forestry program manager for the DNR’s Forest Resources Division. “To this profession, restoring this sawmill is restoring a fundamental piece of forestry and forest history.”

Preservation of an Urban Sawmill 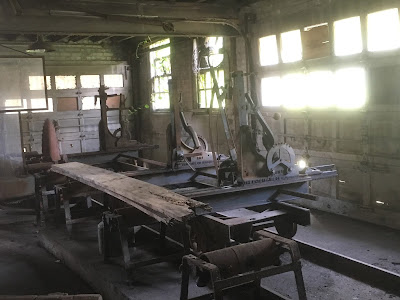 The sawmill on Detroit’s Belle Isle Park seemed to be an odd but interesting artifact.

However, it turns out the City of Detroit had a bit of a progressive streak during the early 20th century related to utilizing urban street and park trees for wood products.

An old, silent Detroit News newsreel video documents this mill's early existence and demonstrates one of the earliest examples in the United States of urban wood utilization or repurposing city trees after they’ve been cut down.

The Belle Isle sawmill building may be the perfect place for that.

“It was like finding a Christmas present under the tree that you forgot about,” Aiken said. “The sawmill has probably been in that specific spot since 1900 or 1905, maybe. They built this building in 1937.”

Aiken said he believes the last wood milled at the site was used to build platforms and other structures for an event at the old Cobo Hall, now the TCF (Bank) Center. Other wood was used for various purposes, such as park benches, city buildings, and fuel for wood-burning stoves and furnaces.

Sayers and Aiken are excited about the possibilities of having a historical and working sawmill in a thriving urban park that sees millions of visitors each year.

“This is a place where we can show how valuable trees are in an urban setting,” Aiken said. “There is really no other place in the world that I can find that will be focused on this agenda, and having it in Michigan at a state park is an opportunity.”

Restoration of the Sawmill is Part of A Long-Range Plan 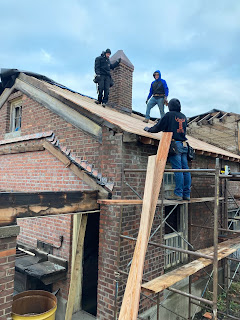 The work to bring the building and the sawmill back to life will take time. It’s happening in phases as funding becomes available and a long-term plan is laid out.

The structural beam repairs, new roof, masonry work, gutters, and downspouts comprise the first phase, a $200,000-plus project funded jointly by the DNR’s Forest Resources and Parks and Recreation divisions, as well as the ASMF, Michigan Forestry Association, and the Belle Isle Conservancy (acting as project fiduciary for the DNR).

The second phase of restoration work, which planners hope will take place this year, will make the building entirely weather-tight with new windows, doors, and exterior paint.

After that, work will move inside, including electrical updates and new interior doors. Later phases include refurbishing the sawing equipment, exterior landscape, and, finally, opening to the public.

“The site could be great for highlighting and interpreting the history and then demonstrating the current equipment and practices using a portable sawmill,” he said.

Not the Only Sawmill Managed by the MDNR 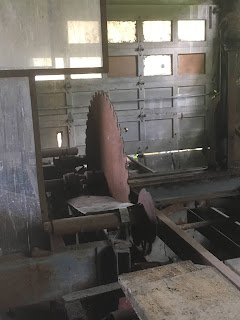 DNR staffers do have some experience with the type of sawmill on Belle Isle. It’s an electric version of the same model as the steam-powered mill used for demonstrations at Hartwick Pines State Park near Grayling in Otsego County. That park includes exhibits, displays, and events centered around Michigan’s logging era.

Amanda Treadwell, the urban field planner for the DNR’s Parks and Recreation Division, applauded the teamwork that has helped launch the restoration efforts.

“Parks and forestry were able to team up together to fix the roof before it deteriorated to a point where it wouldn’t have been salvageable,” she said.

“It allows for educational programming and resources for school kids to come onto the island and learn about environmental careers, what the DNR does in urban areas, forestry practices in urban areas,” she said. “It’s a great connection between the outdoors and urban ecology and forestry.”

Aiken said his organization has various artifacts to display that will help tell the story of urban forestry, including climbing ropes and saddles used by urban foresters, insect and disease management, and more.

“The goal would be an interpretive center very similar to what Hartwick Pines does,” he said.

When Michigan Was Still A Wilderness - 1841 Michigan Map

10 Things You Didn't Know About Owning a Cabin In Michigan

Mackinaw Island - Not a One Horse Town