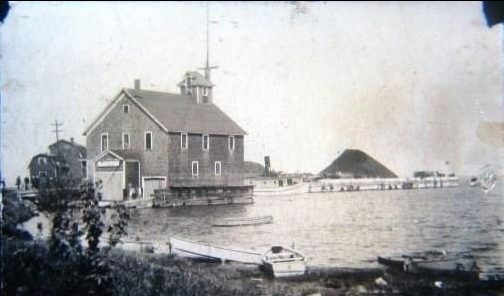 The Huron Milling Co. has dredged a channel from deep water in the harbor to its pier located about 2,900 feet west of the main entrance. The pier is used for receiving coal for company use. Local fishing boats also operate from it. It is a timber sheet pile, solid fill structure, partly capped by concrete, with dimensions and berthing space of 300 feet on the lower side, 195 feet on the upper side, and 165 feet on the face. Depths of water alongside are 15 feet at the face, ll feet at the lower side, and 13 feet at the upper side. The pier is lighted and is served by the Pere Marquette Railway, which has a 1,200-foot track in the center. It has a storage capacity of 8,000 tons of coal and by rehandling an additional l5,000 tons can be handled in the yard. Mechanical equipment in the yard consists of an l8-ton steam locomotive crane with a 55-foot boom and a 3/4 -cubic yard clamshell bucket for handling and a fireless steam locomotive for shifting cars.

The United States Coast Guard maintains a station at a steel sheet pile solid fill bulkhead wharf paved with concrete, about 3,400 feet northwest of the main entrance. The wharf lies offshore and has a timber approach 550 feet long and 5 feet wide. Small craft can be berthed at the north side of the pier where a 20-foot offset divides the width of the pier into 60-foot sections, with 8-foot depths of water alongside. An additional 70 feet of berthing space is available on the shore side of this pier with a 6-foot depth of water alongside.

Two small marine railways for handling the station motor-sailor and whaleboat run into the water on the front or face of the pier, which prevents its use for berthing. These railways are not available for private use and are not suitable for boats of any other type than those mentioned above.