Notable Films Shot in Michigan during 2011

A small-time magician with questionable ethics arrives in a magical land and must choose between becoming a good man or a great one.

Set in the 1960s, three sisters form a girl group and soon become local sensations with major label interest, but fame becomes a challenge as the close-knit family begins to fall apart.


Spy Kids All the Time in the World 4D

A retired spy is called back into action, and to bond with her new step-children, she invites them along for the adventure to stop the evil Timekeeper from taking over the world.

1960’s Psychedelic Counterculture clash during the “Summer of Love,” when an aspiring hippie Afro-Jew from New York dupes the son of a Swedish dairy farmer into smuggling illegal margarine into butter rich Wisconsin.

Hanklin Purvis enjoys the outdoors, and he loves to hunt. He and his wife, Dorothy, live on a farm in the rural mid-west. For some reason, during the season before autumn, things start to get weird.

The Ides of March

This is a political drama film directed by George Clooney. An adaptation of  Beau Willimon's 2008 play Farragut North. During the desperate last days before a massively challenged Ohio presidential primary, an aggressive campaign press secretary finds himself embroiled in a political scandal that threatens to upend his candidate's shot at the presidency.

It stars Clooney alongside Ryan Gosling, Evan Rachel Wood, Philip Seymour Hoffman, Marisa Tomei, Paul Giamatti, and Jeffrey Wright. The film was primarily shot in Detroit and Ann Arbor. 1,000 extras were needed during filming at the University of Michigan. 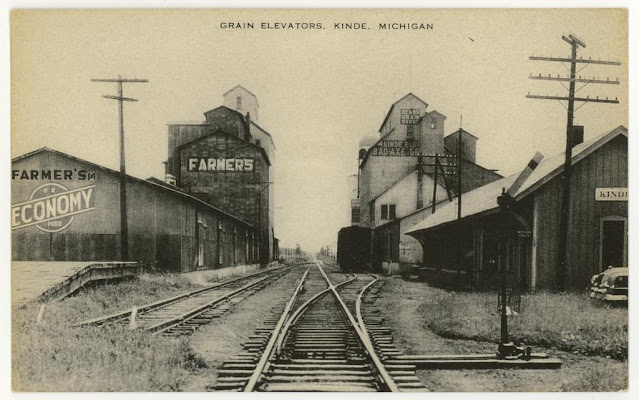 Kinde Michigan Grain Elevators and Depot c1940 It’s a slice of a true American farming community in the Thumb of Michigan. John Kinde founded the village in the 1880s during the region's transition from lumbering to agriculture. A lumber yard, general store, grain elevator, and post office were established followed by a train station in 1882 for the Port Huron and Northwestern Railroad, (PH & NW). Kinde was once renowned as the “ Bean Capital of the World “. Michigan white navy bean soup has been a staple for over one hundred years in the U.S. Senate dining room in the form of Senate bean soup . The Kinde depot still operates today as a final stop in the Upper Thumb for the Huron and Eastern Railway.  The railroad operates 394 miles of track in The Thumb and Flint/Tri-Cities area of Michigan Related Reading for Kinde Michigan The Side-Wheel Steamer of the City of Alpena The Huge Forrestville Dock and the Iron Chief Boat House  Port Crescent Sand and Fill Operatio