Infographic - 100 Years of Influenza Pandemics in the United States

Popular posts from this blog

If you think about it, it makes sense. The routes that the native Michigan tribes made and utilized for thousands of years cover the same ground that Michigan Department of Transportation has paved and we are using today as we cross the state to visit friends in Chicago visit the wineries in Traverse City or watch the Thanksgiving parade in downtown Detroit.


Amazingly, Michigan's first trails were not made by Indians but ranging buffalo herds in migration. This was especially true on the St. Joseph trail in Southwest Michigan.


Major Michigan Trail Systems
Shore Line Trail- A minor trail starting near Toledo and hugging the shore of Lake Erie, the Straits of Detroit. Past Fort Gratiot and Lake Huron to a spot near White Rock. White Rock was considered a solemn spiritual place of offe…
Read more

Can You Climb Turnip Rock? 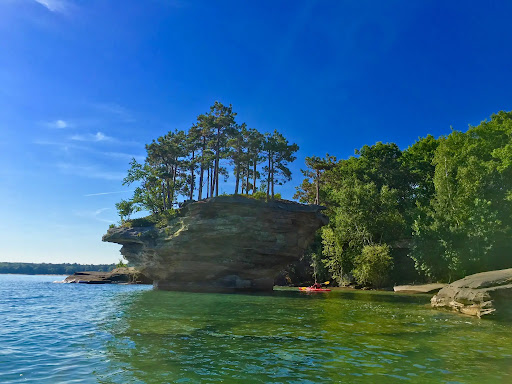 Turnip Rock has been deemed one of the Amazing Rock Formations in America by CNN. Indeed it's one of the most photographed attractions in the Upper Thumb. However, the unique rock formation is located on private land and considered part of the Pointe Aux Barques cottage community.

Access to Turnip Rock is only available as a guest of a member of the Pointe Aux Barques community or if you access by water with a kayak or canoe. That being said you must stay in the water or right along the edge of the water.

As soon as you attempt to climb up the famous rock or its equally favorite neighbor the "thumbnail" your trespassing on private property. Even worse is that the entire formation is subject to extreme conditions and has a tendency to weather, crumble, and fall apart. Climbing will undoubtedly cause some minor, but real damage. It would quickly add up if everyone did it. You will likely end up arrested and having to spend some time in Bad Axe at the county jail. Which w…
Read more

The Lumbering Era in Caseville Michigan

The Spring Log Run
In spring, the winter logging operations ended and the log run to the sawmill began. In this picture two men, referred to as River Hogs, worked to keep the logs moving along the Pigeon River to the sawmill in Caseville. The work took skill and was dangerous. River Hogs were paid up to $3.50 per day.
As the pin logs neared the sawmill near the mouth of the river a boom was running across the river to stop the drive and guide the logs into a bottleneck where they could be sorted by the owner and sawed into lumber.  The Caseville sawmill is believed to be on the other side of the bridge with the sloped roof. More details on Caseville's early days as an industrial powerhouse, along with a map of the town can be read at Caseville's History of Industry.