If you think about it, it makes sense. The routes that the native Michigan tribes made and utilized for thousands of years cover the same ground that the Michigan Department of Transportation has paved and we are using today as we cross the state to visit friends in Chicago, visit the wineries in Traverse City or watch the Thanksgiving parade in downtown Detroit.

Amazingly, Michigan's first trails were not made by Indians but ranging buffalo herds in migration. This was especially true on the St. Joseph trail in Southwest Michigan. 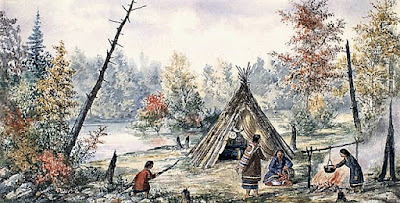 Shore Line Trail - A minor trail starting near Toledo and hugging Lake Erie's shore, the Straits of Detroit. Past Fort Gratiot and Lake Huron to a spot near White Rock. White Rock was considered a solemn spiritual place of offering. Today this route is mirrored by Lakeshore Drive from Detroit to Lexington and M-25 north. This trail continues north along the entire shore to Cheboygan. It was considered a minor trail as travel via canoe was preferred along this route. Michigan chose to utilize much of the original Native American trail along Lake Huron and Saginaw Bay to create M-25. Paving of Michigan's First Scenic Highway was started in 1933 and completed in 1940.


Saginaw Trail - One of the oldest trails, this Sauk trail system, went from the Straits of Detroit to Saginaw. Today this starts at the Detroit River and heads northwest up Woodward Avenue to Pontiac, then continues up Dixie Highway through Flint to Saginaw.


SandRidge Trail - An ancient trail from Saginaw to Port Austin in Michigan's Thumb. Used primarily for access to the rich hunting ground of the  Thumb. Today, M-25 follows much of the same route. However, the old trail is still evident and marked as Sand Road in Huron County. A major canoe passage across Saginaw Bay occurred at Oak Point via Charity Island to reach the AuSable River.

St. Joseph's Trail - A major east-west system called Route du Sieur de la Salle and the Territorial Road. When the Territorial road was first built from Plymouth to St Joseph, a portion of the road was ‘corduroy.’ which means wood logs placed closely together in a fashion resembling the ribs in corduroy fabric.  Today this trail is part of U.S. 12 and vast parts of I-94.

Mackinac Trail - An interior northern Michigan trial to the Mackinac straits hugging the western forests. I-75 covers much of this trail system today.

Sault-Green Bay Trail -  An east-west route across the Upper Peninsula of Michigan. This system is followed by US 2 and State Rte. 35.

Grand River Trail - Trail between Detroit and Grand Rapids, whose route is now followed by the trunk line US 16.


Great Sauk Trail - This major system ran between Detroit and Chicago. In 1820 Henry Schoolcraft was on an expedition with Lewis Cass near Michigan City, Indiana, described the trail as a "plain horse path, which is considerably traveled by traders, hunters, and others..." and said that a stranger could not follow it without the services of a guide because of the numerous side trails. It was so well established that the state followed the Chicago Road (M-12) construction trail in 1827.

Cadillac - Traverse City Trail - Also called Old Indian Trail - Ancient system from 700 BC runs from Cadillac to Traverse Bay. Today this is a marked system with a map and guide. This trail system is maintained by the Little Traverse Bay Bands of Odawa.

Microplastic In The Great Lakes and In You


The next time you brush your teeth or wash your face you may be contributing to adding plastic into the Great Lakes. Back in 2012 the New York Times reported that microplastics were identified as a serious threat to the Great Lakes ecosystem. As of now there is no way to stop the plastic contamination from products with microplastics from entering the watershed.

"Microplastics are really concerning because so many fish or marine species ingest them," Wallace said. "Especially for human health, it's something we're thinking about. If we eat those fish that eat those microplastics, what does that mean?" -- Dr. Lorena Rios Mendoza

What may be a bigger factor is our clothing. Fibers fall off our clothing everytime we launder them. These microfibers get past waste treatment and into our water system.

Get more information at  Have We Turned the Great Lakes Into A Plastic Soup? on Thumbwind.com