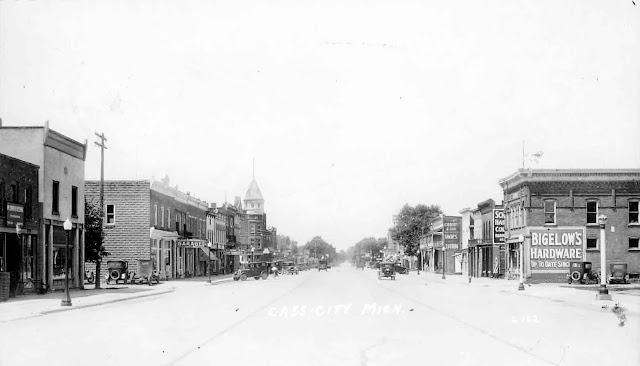 Two Views of Cass City This amazing west-facing view of Cass City Road in Cass City has stayed somewhat unchanged for the past 90 years. Some of the buildings remain, many have been remodeled. However, the ornate trim and front facades and balconies are long gone.

The New Sheridan Hotel The three-story building on the left was the Sheridan Hotel built-in 1895 by Michael Sheridan. It was considered a skyscraper in its day. Constructed of iron, brick, and glass and topped with a distinctive "witches cap". This Victorian-era structure was a common project in successful smaller towns across America and it was a point of pride for the residents of Cass City. 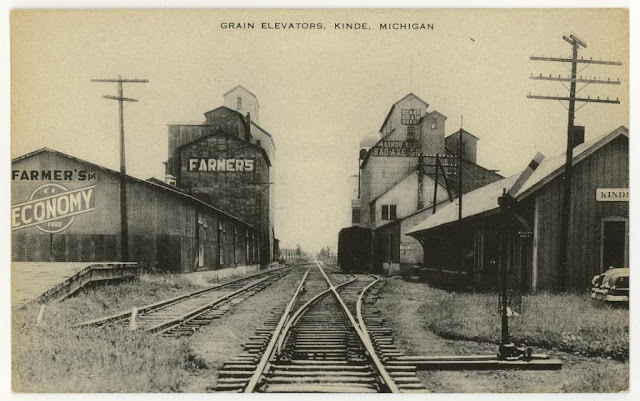 Kinde Michigan Grain Elevators and Depot c1940
It’s a slice of a true American farming community in the Thumb of Michigan. John Kinde founded the village in the 1880s during the region's transition from lumbering to agriculture. A lumber yard, general store, grain elevator, and post office were established followed by a train station in 1882 for the Port Huron and Northwestern Railroad, (PH & NW).
Kinde was once renowned as the “Bean Capital of the World“. Michigan white navy bean soup has been a staple for over one hundred years in the U.S. Senate dining room in the form of Senate bean soup.
The Kinde depot still operates today as a final stop in the Upper Thumb for the Huron and Eastern Railway.  The railroad operates 394 miles of track in The Thumb and Flint/Tri-Cities area of Michigan 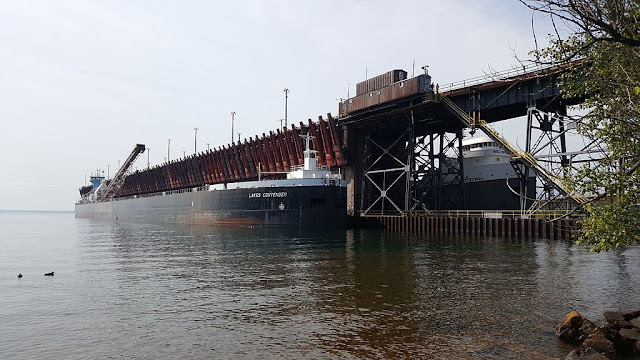 The Presque Isle Dock near Marquette Michigan
For over 110 years the Lake Superior and Ishpeming Railroad dock have loaded over 500 million tons of ore. The pocket dock was built in 1912 and is 1,250 feet in length, 60 feet wide, and rises 75-feet above the shoreline. The loading structure contains 200 pockets, each capable of holding 250 tons of ore. While not unloaded,  simultaneously the dock has a total capacity of 50,000 tons. If You Go Be sure to visit the nearby Presque Isle Park. With its beaches and small rocky cliffs, there are numerous opportunities for great picture taking when the lake is rough.

The Side-Wheel Steamer City of Alpena

Steamer City of AlpenaThe City of Alpena and the City of Mackinac were sister ships conducting service as part of the Detroit and Cleveland line. This 285-foot 2,000 horsepower sidewheel paddlewheel started service in 1893 and could carry up to 400 passengers and freight along the D&C’s “Coast Line to Mackinaw” run.

The ship ran the Lake Huron Route for 28 years. In 1921 she was moved to Lake Michigan and renamed City of Saugatuck. By the late 1930s, the once-proud ship was reduced being rebuilt as a pulpwood barge hauling pulpwood and other freight. It was owned by several paper companies in its final years of service.  The ship was broken up for scrap in 1957.

Very little is currently available online on this huge Forestville dock. So, we turned to some genealogical information to fill in the blanks. This is an excerpt from Forestville Bicentennial History. Forestville’s Huge DocksThe docks, or landings, built to handle lake shipping were maintained at a continual expense; but dockage, none the less, made a land-office business in the old days The original Forestville docks were made of logs cribs filled with stones, piling supporting the warehouse end of the pier. Their approaches were made down on the beach terrace, and neither of the docks ran straight out into the lake but stood at about a 15-degree angle from due east.

At the time of the 1871 fire, the "Ward" dock was being run by Jake Buel, the local lumber king. Jake and Eber B. Ward rebuilt the dock after the fire and operated it until about 1877.*
Docks were a Community Gathering Spot

The docks became the economic centers of the shore towns, but they were also a social cente…
Post a Comment
Read more

Sand Operations For Glass ManufacturingBy 1894, all of the buildings in Port Crescent were gone, leaving few traces of the town behind. Nathaniel Bennett Haskell, who owned the sawmill and salt plant on the west side of the river died at age 82.

GMC 350 Dump Truck with a Silver Horse in Unionville, Michigan

An Unusual View - Horse in a 1950 GMC Truck
Sometimes something catches your eye that you just have to circle back and take a look. This was one of those cases. It was almost like I was indulging my inner child who wanted to stop and take a look at just about every strange site during our family vacation trips in the 1960s.
This GMC truck was behind a bunch of faded storefronts in Unionville. I think one of the buildings was used to store classic vehicles. My best guess is that this is a 1950 GMC 350 Dump Truck.